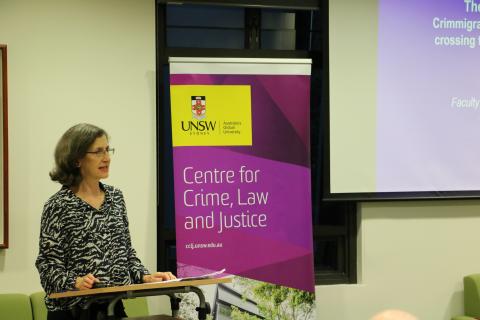 Lucia Zedner, Professor of Criminal Justice in the Faculty of Law, All Souls College, Oxford.

The concept of crimmigration recognizes the growing convergence of criminal law and immigration law as states seek to police migration, punish immigration offenses, and defend the boundaries of the sovereign state. Nowhere have these aims been pursued more vigorously than with respect to counter-terrorism, as states openly avail themselves of all legal means to target international terrorist networks and the growth of foreign terrorist fighters. The collapse of the so-called ‘caliphate’ in Syria and Iraq has raised the threat of thousands of returning foreign fighters with whom states are ill-equipped to deal. In the U.K., legislative hyper-activity has produced a succession of counter-terrorist statutes that mix criminal law and immigration law: some of the most draconian of these laws target the border and seek to limit the mobility of those who cross it. Closer attention to the territorial border reveals a liminal zone in which police and immigration officials enjoy exceptional powers and adherence to due process is eroded. Apparent public acceptance of the imperative of security at the border provides a seeming license for such intrusions but provides little guarantee of their legitimacy. I examine the security concerns that motivate the expansion of police powers at the border. By way of illustration, I consider recent UK legislation, not least the Counter-Terrorism and Border Security Act 2019, which creates a new ‘designated area offence’ (closely modelled on its Australia forebear), a crime of ‘hostile state activity’, and significantly expands police powers at the border. In conclusion, I consider whether the border, if it is not yet a legal black hole, has become a grey zone for legality, and ask if such provisions cross the line on human rights.

Lucia Zedner is a Senior Research Fellow at All Souls College, Oxford, Professor of Criminal Justice in the Faculty of Law, and member of the Centre for Criminology, University of Oxford. She is a Conjoint Professor at UNSW Law.