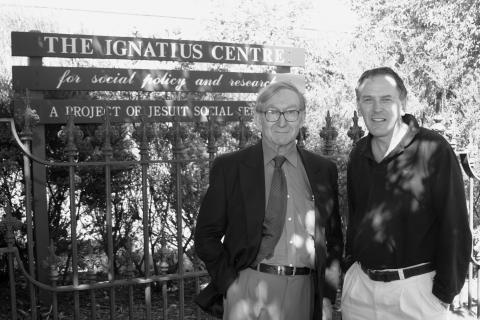 What could be more fitting in Social Sciences week, than to honour the memory of Professor Tony Vinson - eminent social researcher, passionate reformer and among his many former roles, Chair of Social Work at UNSW?

Join us to hear Professor Peter Norden, a renowned advocate for prison reform and social justice and an expert in social policy speak of Tony Vinson’s legacy in this Inaugural Tony Vinson Memorial Lecture Series.

In acknowledging the contribution that Tony Vinson made to penal reform and social policy more broadly over a career spanning almost 50years, this Lecture will present a radical, alternative approach to the rapidly expanding ‘prison estate’ that has effectively extended the social control arm of State and Territory governments over the last two decades to the most marginalised and disadvantaged groups in Australian society. We see this being played out currently with regard to the so called ‘African gang’ rhetoric of both State and Federal authorities. Perhaps it is time for the Office of Home Affairs to start focusing on community cohesion, rather than alienation and division. It is overtime for the pendulum to swing back in Australia, as we have already seen over the last 15 years in the United States.

Professor Peter Norden is a Fellow of the Australian and New Zealand Society of Criminology and an Honorary Fellow in the School of Humanities and Social Sciences at Deakin University. Peter has a long history of involvement in the criminal justice system. In 1977 he established a post release service for high risk adult offenders, which he developed into what is now known as Jesuit Social Services. As Director of Jesuit Social Services, Peter worked with Professor Tony Vinson on the research that led to the 2007 report Dropping Off the Edge: The Distribution of Disadvantage in Australia. From 1985-1992 he was the Chaplain at Melbourne’s Pentridge Prison, and after his retirement from that position established the Victorian Criminal Justice Coalition which focused on criminal justice reform throughout the country. In 2007 he was made an Officer in the Order of Australia (AO) ‘for services to community development through social research and programs aimed at assisting marginalised young people and offenders, and to the mental health sector’.