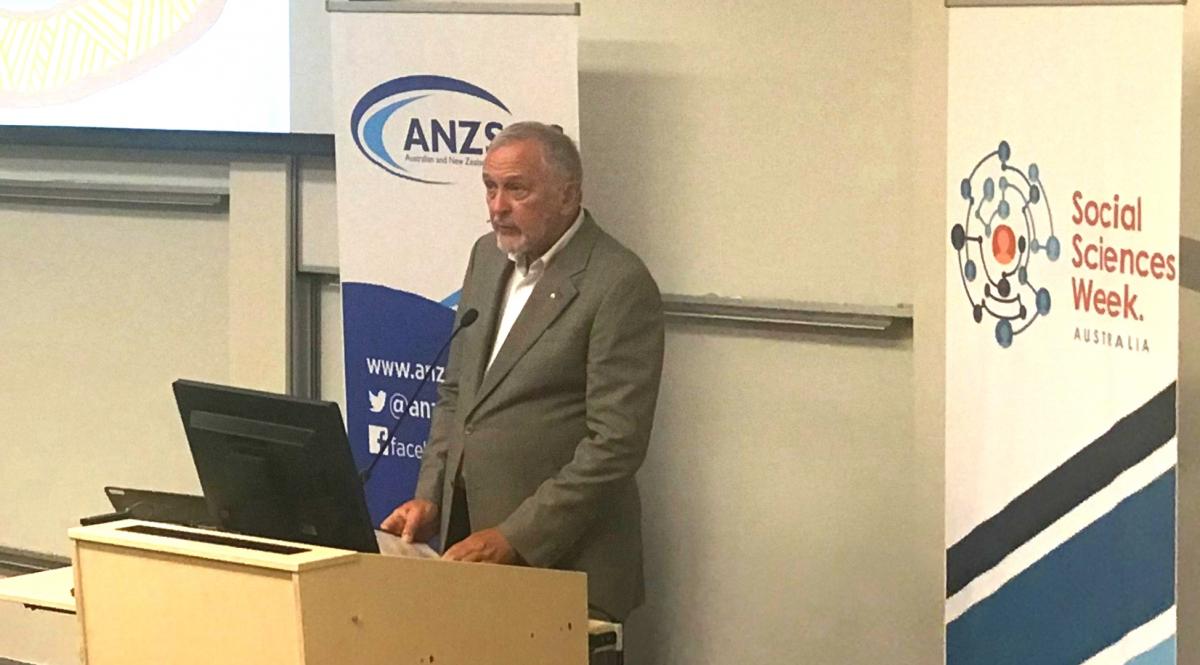 On Tuesday, 11 September 2018, the Centre for Crime, Law and Justice hosted the Inaugural Tony Vinson Memorial Lecture to celebrate the seminal contributions and achievements of Tony Vinson in criminal justice and the social sciences more generally over more than five decades. The lecture was presented by Peter Norden, Fellow of the Australian and New Zealand Society of Criminology and Honorary Fellow in the School of Humanities and Social Sciences at Deakin University.

The diverse range of people attending the memorial lecture – government representatives, former members of the judiciary, community activists, teachers, trade unionists, academics, lawyers and students – reflected the very high regard for Tony and his work and the influence he had in many areas of social policy. We especially welcomed the attendance of Tony’s family and friends.

Tony’s many achievements and milestones, some of which were highlighted, included his work as the Commissioner of the NSW Department of Corrections, his research into ‘postcode disadvantage’ which led to the major report ‘Dropping off the Edge: The Distribution of Disadvantage in Australia’ and his role as the Head of the School of Social Work at UNSW.

Peter also addressed the major challenges currently facing Australia’s criminal justice system especially in relation to mass incarceration. He noted alarming trends in the increasing rates of incarceration and how this is impacting the most disadvantaged and vulnerable groups in Australian society. With a historical background to frame the discussion, it was an informative and unique insight into how Australia’s law, policies and attitudes surrounding incarceration have changed, but also how some aspects had remained the same, or even worsened - for example, the excessive rates of incarceration of Aboriginal and Torres Strait Islander peoples, and the treatment of prisoners.

On the back of these discussions, Peter Norden proposed an alternative 10 Step Pathway to reducing incarceration, focusing broadly on social policies which addressed the complex needs and vulnerabilities of groups at risk, or already caught in the criminal justice system. For instance, his plan sought to address the housing or support needs of those charged with an offence to lower the remand rate, disability services to provide community alternatives for persons with intellectual disabilities charged with an offence, and school retention and a focus on employment for young people at risk. Other steps considered drug and alcohol services, mental health services, and maintaining connections to family and friends. Finally, Peter called for a focus on justice reinvestment in 10 of the most disadvantaged postcode areas.

These steps in combination sent a clear and powerful message: that any approach to reducing incarceration must be comprehensive, holistic and specifically target the social, health and economic factors leading to criminal behaviour.

The Q and A provided an opportunity for the audience to offer their reflections on the work and influence of Tony Vinson and to ask what had happened to stall much needed reforms in NSW. Why have statistics about incarceration and social disadvantage not improved and indeed deteriorated? How might the political difficulties of creating a path to abolition be overcome? They also highlighted the importance of grassroots advocacy and activism, and the fundamental ideological divide amongst Australians about incarceration and the role of prisons in our criminal justice system.

The evening’s commemoration of Tony Vinson was engaging and moving, but fittingly the lecture was also an inspiration and provocation for action designed to challenge mass incarceration. We hope that this is only the first of many more events to honor Tony Vinson’s influence, life and work!